My Sketchnotes and Thoughts from BaconBizConf 2013

It is hard to explain how excited I was when Amy announced BaconBizConf in April of 2013. A small conference devoted to like-minded people that either are, or want to be, bootstrapping product businesses. The speaker lineup included personal "gurus" that I look up to and listen to closely like Brennan Dunn and Patrick McKenzie. Sold again.

It was a great conference, and I sketchnoted the entire thing. I wanted to share my notes with you here, and talk about what I absorbed from these talks. 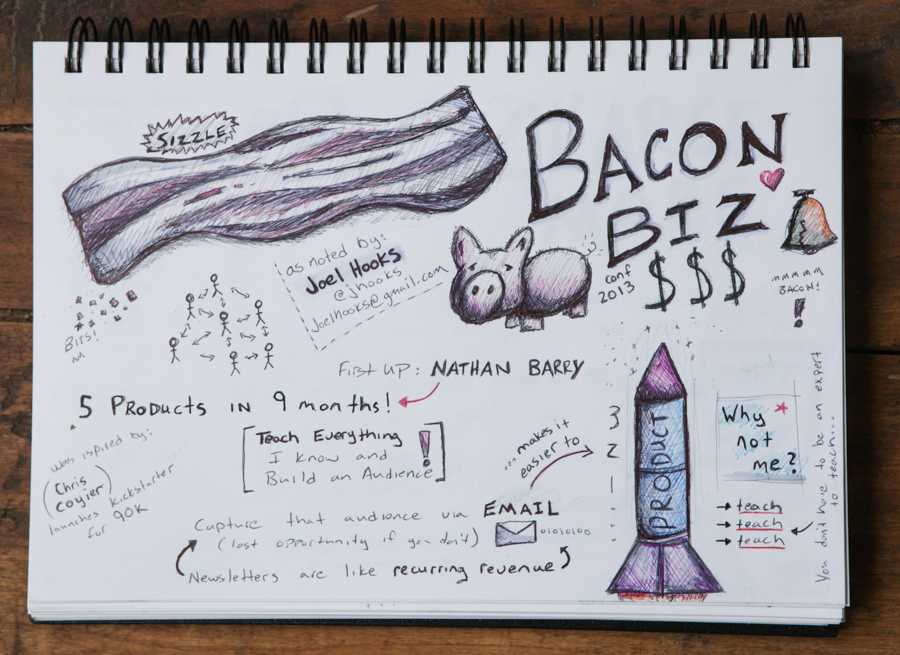 Nathan Barry has had a really good year. He's released several infoproducts including The App Design Handbook, Designing Web Applications, and most recently Authority which is about... self publishing infoproducts. Additionally he's launched his first SAAS product with ConvertKit. This dude is busy. He's also made $200k in the last 9 months across these products. 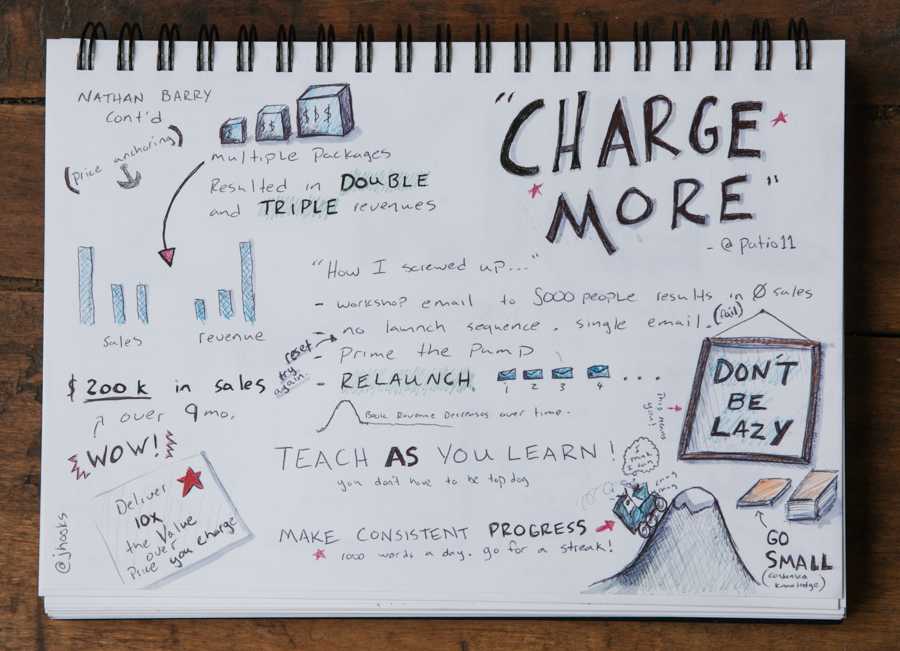 My key take-aways from Nathan's talk were:

He's an inspiring guy, and his products are of the highest quality. 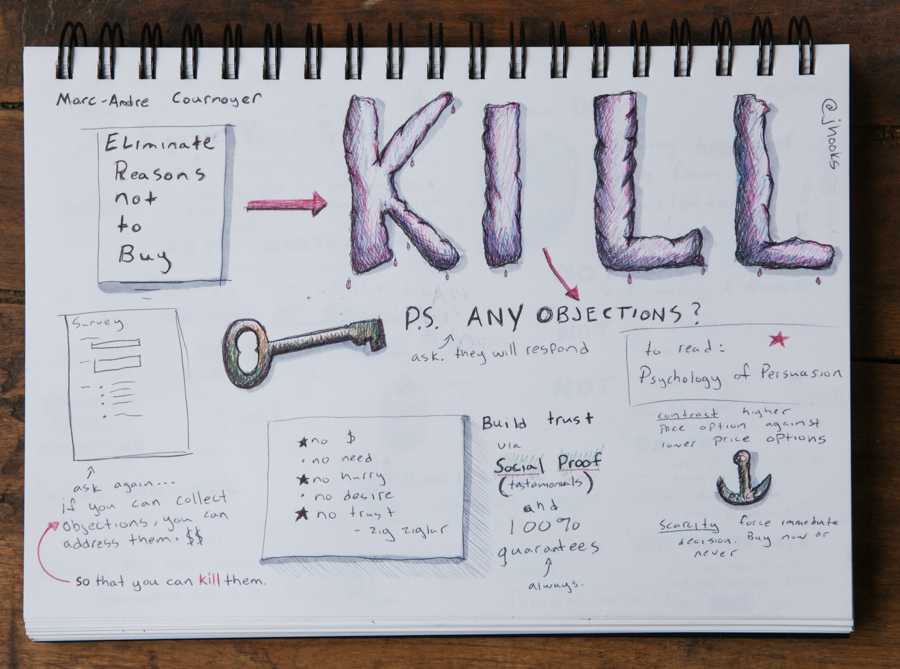 Next up was Marc-Andre Cournoyer who wrote Create Your Own Programming Language. Marc really hammered home the need to actively seek out and kill objections your potential customers might have. He pointed out that social proof is absolutely essential when you are trying to sell a product, and that anchoring prices against much higher prices is extremely effective. 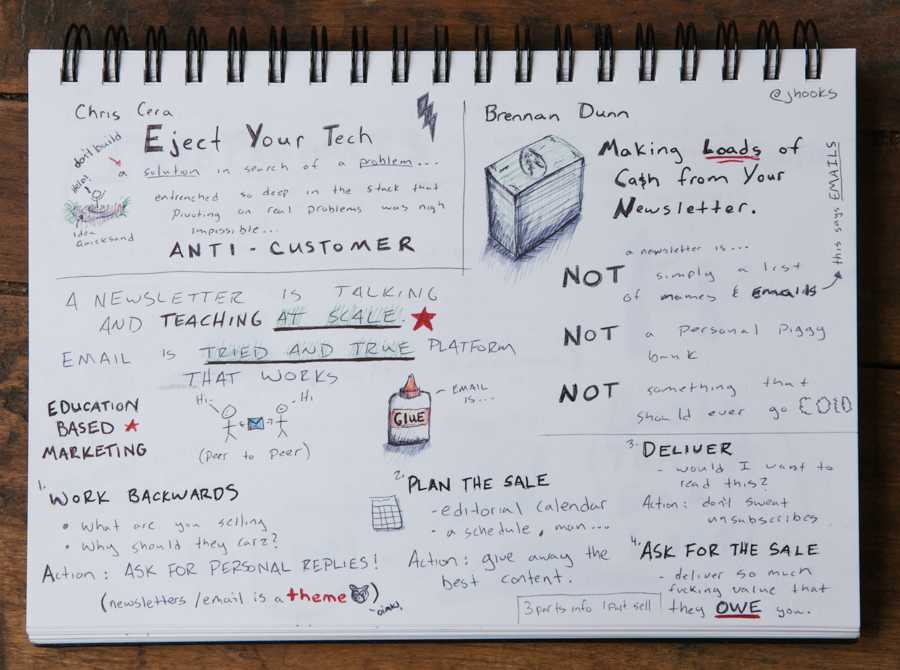 Brennan Dunn gave a talk on making money via an email newsletter. Email is "old school", which means it is tried and true platform for reaching your potential customers. Education based marketing is highly effective, and we are delivering constant value to our audiences inbox on a regular basis. By "giving away" our most valuable content, we are priming the audience for future product offerings.

I can say from first hand experience that this works. I've bought Brennan's books, and even took his Consultancy Masterclass. 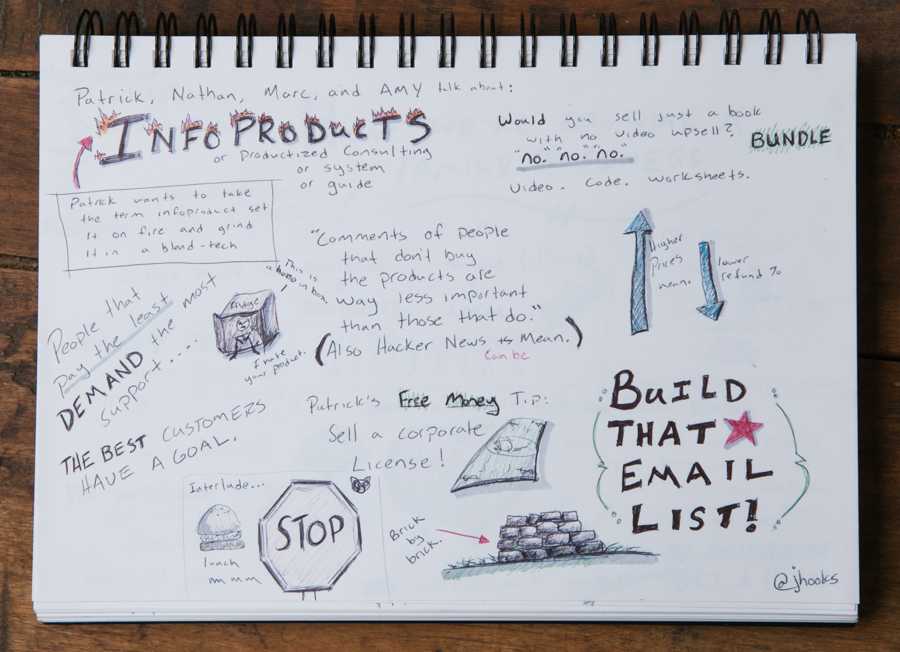 This was a panel on infoproducts. Tiers. Email lists. Charging more.

There was a definite theme. 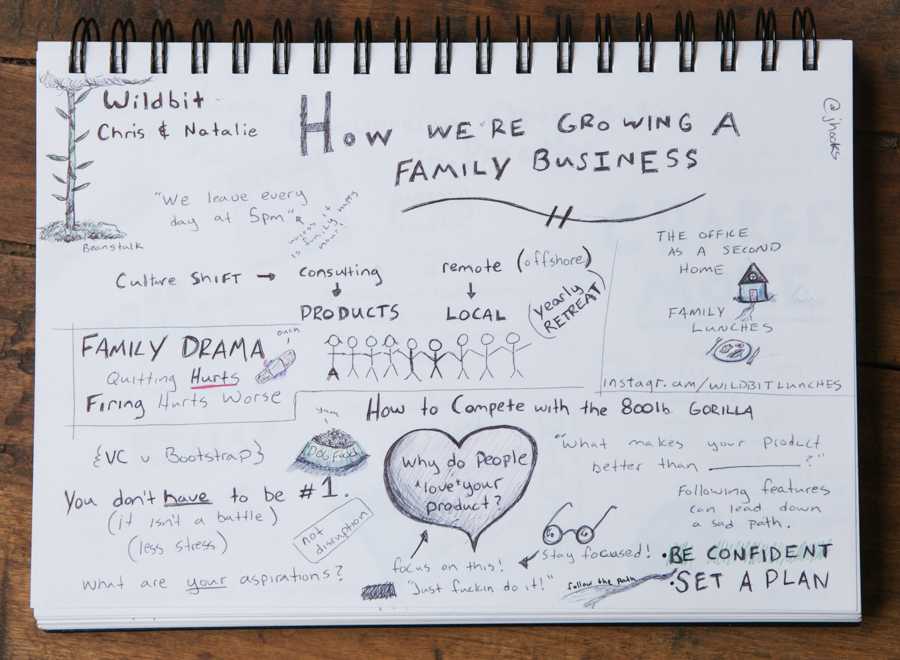 Chris and Natalie from Wildbit Software are the creators of Beanstalk. They started out with a 100% remote development team, and have been migrating to an onsite structure after 10 years of doing remote.

At first I though, "meh, working at home is awesome", but then they got into how they structure the office. Essentially it is a home-away-from-home. The office is comfortable. Co-workers are treated like family. They dine together. They have their families up for happy hour (kids included), and generally have a great time. Once a year they have a company retreat, where they rent a property in an exotic location and gather as a group.

I will admit that I was reconsidering my staunch remote only world view after hearing them talk about their setup.

The second half of their talk was about competing with the big boys. It is interesting to consider that #1 does not have to be the goal. They are seeing great success delighting their clients in a space with a lot of competition. I thought that was cool, and a very good point. 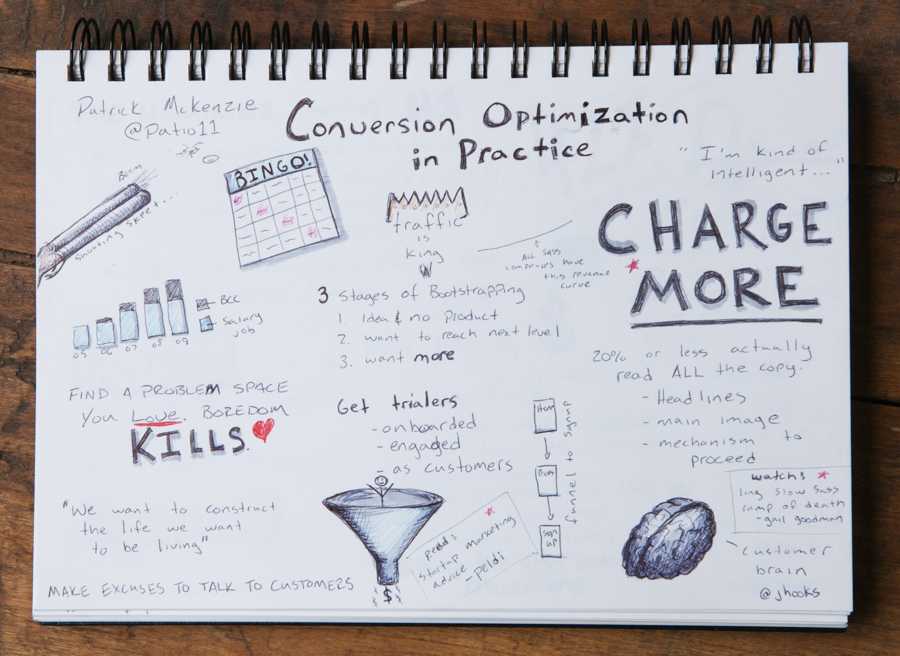 If there was any of these talks that had the potential to exponentially pay for the cost of admission, it was Patrick's. Known in some circles as Patio11, Patrick built a successful business around selling printable bingo cards to teachers. WTFLOL? In the process he got really good at SEO and online marketing. 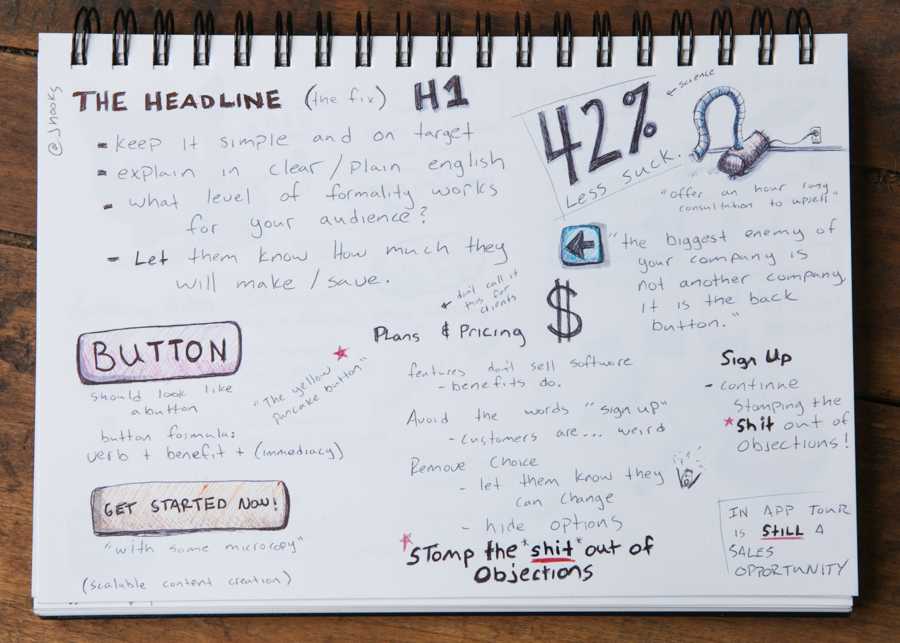 He gave really good advice on the "funnel" and converting visits into sales. He reiterated the early advice from Marc about stomping the shit out of objections that potential customers might have.

I'm excited to put his advice into practice. 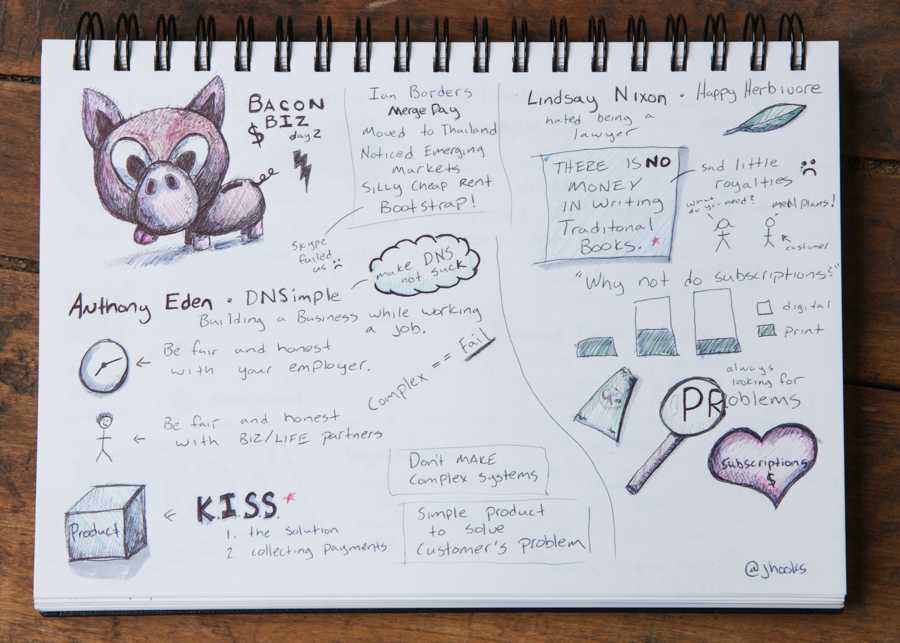 Anthony Eden founded DNSimple while working another job. He attacked a simple problem and delivered a simple solution and has since seen success and growth. He now works on DNSimple fulltime.

Lindsay Nixon got sick of lawyering and leveraged the success of traditionally published cookbooks into subscription vegan meal-plans that are generating tidy profits. Recurring tidy profits. 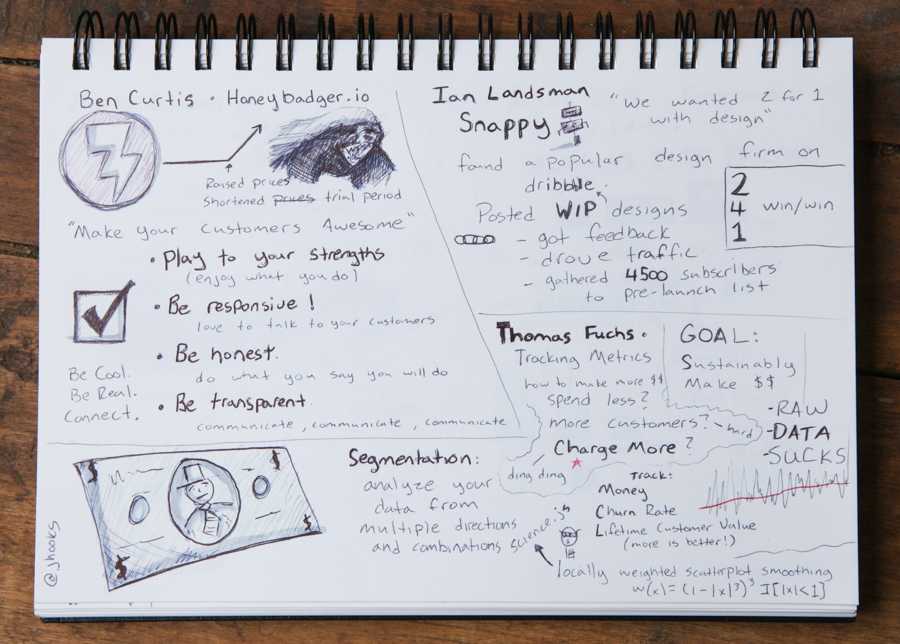 Ben Curtis of Honeybadger strives to make his customers awesome. Honesty, responsiveness, and transparency with your customers will help to ensure that they continue to be your customers.

Ian Landsman of Snappy leveraged a design firm with popularity on Dribble to get "2 for 1" on his design work. They encouraged the firm to post "everything" on Dribbble, which funneled potential clients to their website and resulted in 5000 pre-launch subscribers to their mailing list.

Thomas Fuchs gave an interesting rundown of tracking metrics like money, churn rate, and lifetime customer value. He pointed out how shitty raw data can be, and gave some tips on converting that raw data into something usable. 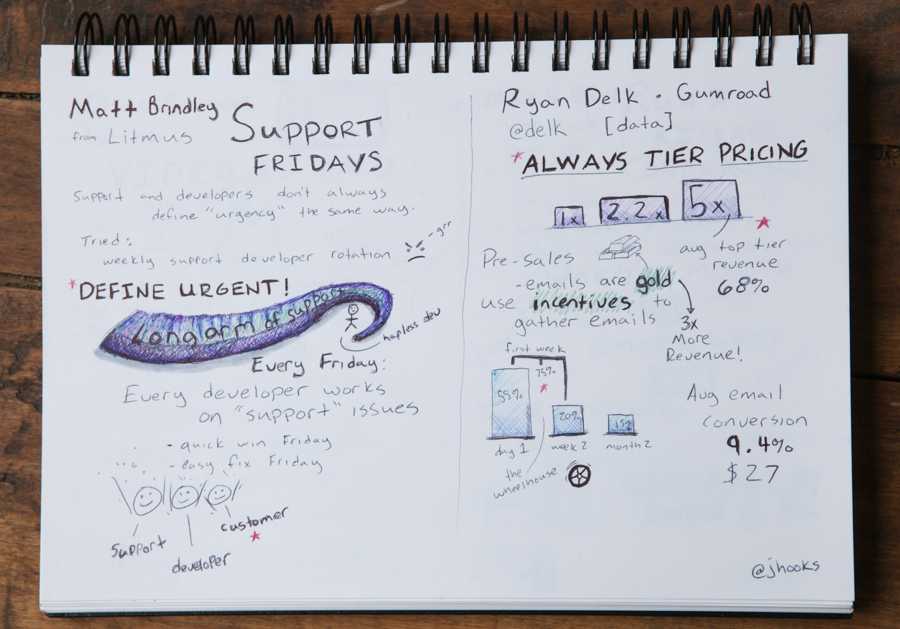 Matt Brindley of Litmus told us how they eliminated tension between development and support by implementing "support Fridays". The result is less confusion and happier customers.

Ryan Delk from Gumroad broke down some very interesting metrics in regards to launches across various mediums. The short story? Email converts to $$. 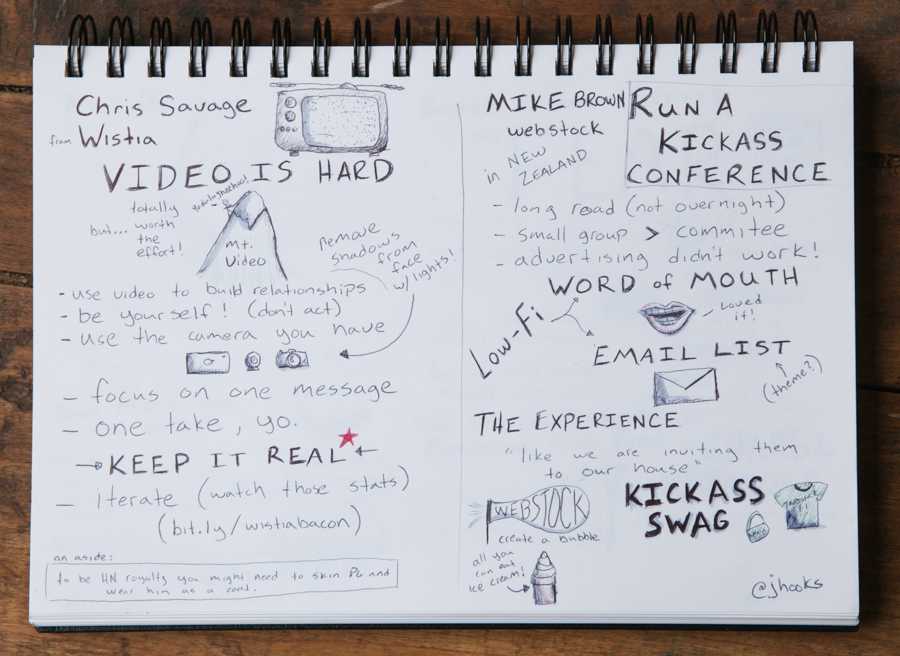 Chris Savage from Wistia gave a convincing talk about using video in meaningful ways. It made me seriously consider how video can play into a solid marketing plan, and he had tips about how to deliver quality content that customers will respond to.

Mike Brown puts on a conference called Webstock in New Zealand. They don't market the conference, but it sells out and they get world class speakers. If you ever wanted a deductible way of hitting New Zealand, you should consider Webstock. I know I am. 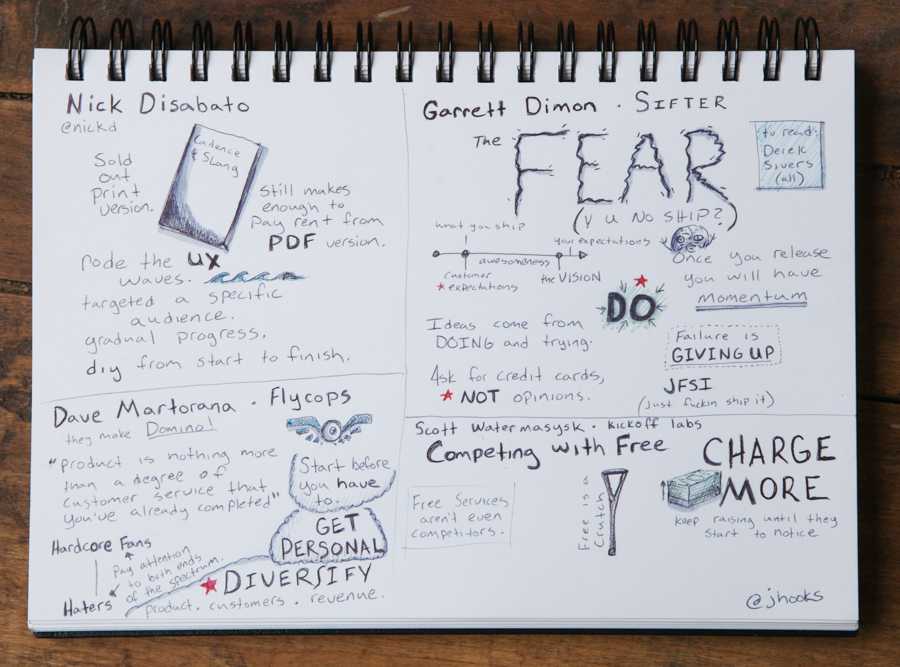 Nick Disabato got into Kickstarter early with his publishing of Cadence & Slang, a wonderful volume on User Experience and interaction design. He presented it as how he did "all the wrong things", but as a backer of the project, and a happy customer, I'd say he did a lot of right things. I'm looking forward to his next edition of the book.

Garrett Dimon is the founder of Sifter. His talk on fear resonated with me. It is so easy to get completely locked up with fear. I know this personally. Build something. Just fucking ship it.

Dave Martorana is a founder at Flyclops. They make an iOS game called Domino! that has seen some success. He said that diversification would really help their business. A single app in a single app store is scary.

Scott Watermasysk from Kickoff Labs was the last speaker of the day. He reiterated the charge more mantra as well as pointing out that free services aren't really competitors. Free is a crutch!

This was an awesome experience. The conference had a lot of extended breaks for mingling and getting to know people. The speakers were all awesome and open, as well as highly available. The knowledge that got dropped was outrageously high quality, and I will keep going back as long as they hold it.

It was also my first time in Philly. Great town!

In the spirit of BaconBiz I've decided to high resolution DRM free PDFs of my notes. Before you ask, I do realize that the entire set is posted above, but if you'd like your own copy for archive and would like to encourage future note taking, please take advantage and buy the PDF :>

You might also enjoy: What I Learned From Brennan Dunn's Consultancy Masterclass