The basics of using ui-router with AngularJS

Something that might not be obvious is that URL routing is also a finite state machine. When you configure the routing for an app, you are laying out the various states the application can be in, and informing the application what to display and do when a specific route is encountered.

AngularJS supplies URL routing by default. It is adequate, but also has some limitations. 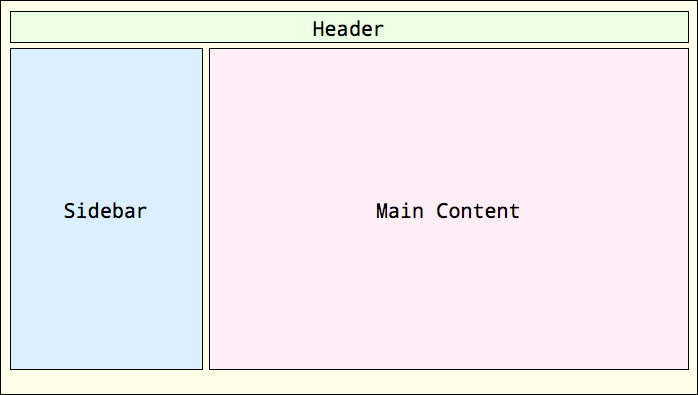 So what's the problem?

Looking at the structure above, imagine an application where interacting with items on the header or the sidebar causes the main content to load completely different HTML. AngularJS provides a mechanism for this with ng-switch. You can see a (very simple) example of this below.

In this case, ng-switch is swapping out div elements, but you can also use this approach to swap out templates using ng-include.

I'm not going to explore this option. I'm not particularly fond of it.

ui-router fully embraces the state-machine nature of a routing system. It allows you to define states, and transition your application to those states. The real win is that it allows you to decouple nested states, and do some very complicated layouts in an elegant way.

You need to think about your routing a bit differently, but once you get your head around the state-based approach, I think you will like it.

This example is functionally very similar to the ng-switch approach. The main difference is that the main content area is populated with templated HTML for each of the states, without using switching or ng-include.

After the states are defined, they are added to the $stateProvider. They are now ready to be navigated to.

the run method is a great place to navigate to your intial state. You are able to inject the now-resolved $state object and use its transitionTo method to set home as the current state.

The SidebarCtrl lists contains a simple array called content on its $scope which is used in a ng-repeat to give us a simple menu. When one of those items is clicked the setPage function is called with the item that was clicked. In this case, the content items correspond to the names of the states that we've defined, so we simply transitionTo the selected state to display the content of that state.

Next steps with ui-router

This only really scratches the very surface of what you can pull off with ui-router. There are a ton of options and the wiki is well put together. Some things I didn't explore, but that are available:

The ui-router README warns that the utility is still in active early development. The API is still subject to change, so if you choose ui-router for your next project, that is something to be aware of.

Let me know if you'd like me to explore ui-router a bit deeper in future posts. I think it is an excellent approach to routing, and look forward to using it more.

Update: I've recorded a screencast about ui-router for egghead.io.

Update 2: Here's a screencast about ui-router's named views that I recorded for egghead.io. (note: it is paid/subscription content)